An international research team led by Robert Dominko, from the National Institute of Chemistry in Ljubljana (SLO), reported the mechanism of a Magnesium- Sulfur battery operating with an electrolyte made of commercially available salts. In the year of Nobel Prize for Chemistry awarded to Lithium batteries, we report a research on the new frontiers of battery technology.

Lithium batteries “enabled the mobile world”. Words pronounced by Professor Olof Ramström, member of the Nobel Committee for Chemistry that, in 2019, awarded Professors John B. Goodenough, M. Stanley Whittingham, and Akira Yoshino. The three pioneers made the diffusion of rechargeable batteries, currently used in everything from mobile phones to electric cars, possible. 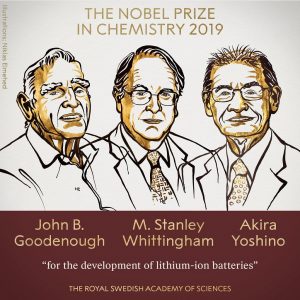 Stanley Whittingham was the first who developed a rechargeable Lithium battery during the oil crisis of 1970. Nevertheless, those batteries were prone to self-combustion and explosions. In 1980 Goodenough experimented an oxide of Lithium-Cobalt for the cathode, thus doubling the battery potential. However, the safety was still an issue, solved only in 1985 by Akira Yoshino, who invented the modern Lithium-ion (Li-ion) battery.

Despite the great success, significant drawbacks are emerging. Current Li-ion batteries are approaching their capacity limits, and concerns have been raised on the mining industry of both Lithium and Cobalt. The first is mainly present in Latin America, China, Australia, and its extraction harms water resources by both depletion and pollution. Cobalt instead, raises even more concerns since 70% of the global resources are concentrated in the Democratic Republic of Congo, where prevails issues of political instability and poor work conditions, including child labor. 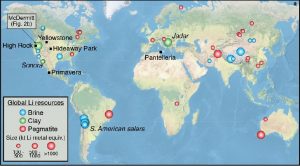 Considering the current geopolitical situation and the increasing need for battery capacity for the near future, there’s a strong interest in the development of new energy storage technologies. Between those, there are Lithium-Sulfur (Li- S) and Magnesium- Sulfur (Mg- S) batteries. Especially the latter is an attractive candidate due to its high volumetric capacity, which is almost double than that of Lithium. Magnesium is also cheaper, safer, abundant, and readily available in various materials all around the globe. 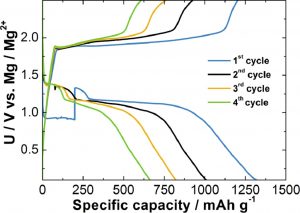 One of the challenges to the large scale deployment of this technology is the development of specific electrolytes to improve the performances of the Mg- S batteries. An international team of scientists, led by Professor Robert Dominko, from the Slovenian National Institute of Chemistry in Ljubljana (Slovenia), tested a mixture of simple and commercially available magnesium salts dissolved in ether-based solvents. The properties given by the new electrolytic solution were investigated in detail through Nuclear Magnetic Resonance at the Slovenian CERIC partner facility at the National Institute of Chemistry in Ljubljana, and X-ray absorption spectroscopy at the Italian CERIC partner facility at Elettra Sincrotrone Trieste. This research allowed science to gather insights into how such batteries work in the path of delivering a fundamental technology for a world that is increasingly relying on batteries.