Call for expression of interest

Call for expression of interest

Article 5 of CERIC Statutes states that CERIC’s objective shall be to contribute to European top-level research and technological development and demonstration programs and projects, thus representing an added value for the development of the European Research Area (ERA). It should also further the integration of the multidisciplinary analytical, synthesis and sample preparation capabilities of national Partner Facilities (PFs) operating mainly in the Central European Area, into a unique, EU-level Distributed Research Infrastructure, open to researchers at the world level.

To this end, CERIC has awarded Research Grants and Infrastructure Development funds and supports PhDs and plans to support further activities. These will be defined on the basis of expressions of interest (EoI) submitted by the CERIC PFs through their Directors and selected through evaluation by its International Scientific and Technical Advisory Committee (ISTAC). In exceptional cases, an institution not associated with CERIC may be invited to submit a proposal.

This call for EoI aims to collect proposals on various activities and ideas to maximise the impact on the development of CERIC while simplifying the initial application process. Applications will be followed by a selection based on evaluation by ISTAC and by negotiations with the selected proposers allowing the preparation of a final detailed proposal, a ranking by ISTAC and approval of the funding allocation by the GA.

Goal and scope of the invitation

CERIC is publishing this call to collect EoIs from its PFs and other institutions. The EoI should include proposals to:

CERIC recognises that at this stage of its development, there are diverse needs of the PFs and CERIC, which may require support through different actions. The applicants are therefore invited to submit EoIs involving:

The personnel shall undertake research/technical activities within at least two CERIC’s PFs, to be demonstrated through joint outputs. In the case of PhDs, if needed, there will be one supervisor from a selected University and/or one tutor/supervisor from each facility involved. The 2-year postdocs contracts, if granted, will be awarded by CERIC and the personnel will contribute in-kind to the selected facilities. Preferably, all HR should be shared between at least two facilities.

The action will aim to strengthen the RI of CERIC and its offer, particularly in its priority fields of energy materials (battery, fuel cells, electrolysers) and life science research. It will support either the purchase of equipment or an upgrade or construction of an instrument or a beamline, in which case technical and implementation designs containing sufficient detail for the ISTAC’s decision should be annexed to the proposal.

The maximum amount required and allotted for a single proposal should optimally not exceed 500,000 EUR in total and should be used to co-fund an upgrade or new equipment. Ideally, the project should be completed within 2 years from the signing of the contract, although longer periods may be accepted if properly justified.

The EoIs should be submitted by the Director of a CERIC PF. In order to strengthen the offer of CERIC, applications from institutions other than CERIC’s PF/representing entity (RE) are eligible, providing that the applying institution commits to provide open access to a specified RI through the CERIC open calls for the duration of the support activity, or for 5 years after the completion of the RI, in the case of RI investment. In such a case, the EoIs should be signed by the Director of the submitting institution.

While single applicant EoI proposals are also possible (e.g. in the case of the institutions external to CERIC), collaborative proposals bringing together two or more members are preferred.

Each facility can submit a maximum number of proposals according to table 1, clearly indicating a priority between multiple proposals. The table was calculated considering the amount of instrument time provided by the PF to CERIC users and according to what established by the BoD for associated facilities.

The ISTAC will be in charge of the evaluation of the EoI proposals. If needed, it may invite external experts to provide an opinion. The ISTAC will formulate their recommendations based on the following criteria:

For the RI upgrades/development of the RIs, the proposals should present a credible plan of how the operation of the new facility will be funded and sustained. Proposals lacking this requirement will not be considered for funding. For co-investments, a letter of commitment signed by the legal representative of the co-investor will be requested if the proposal is short-listed. This will be a condition for the signature of the grant agreement.

In the first phase, each of the three criteria will be scored from 1-5, 5 meaning excellent. The first two criteria will be preponderant. As a part of the first stage of the assessment, ISTAC will also add comments regarding the need for further information or for modifications to the proposals. The updated proposals and the terms of contracts negotiated by CERIC will be used in the second phase for the creation of the ranking list by ISTAC and sent to the General Assembly for the final funding decision, optimally, during its November 2022 meeting.

The ISTAC may decide not to propose any proposal for funding.

The proposals must be submitted by the Director of a CERIC Partner Facility or the non-CERIC institution. All proposals must be complete and submitted before the relevant deadline. Proposals exceeding the maximum budget specified for the CERIC contribution or incomplete may be considered ineligible.

The proposal must give a full account of the costs of the overall project, from design to implementation, including the part to be charged on the CERIC contribution and the costs of resources contributed “in-kind” (e.g., for the design and preparatory studies in the case of RI investment.) and ‘in cash’ by the hosting institution or third parties.

The following costs are eligible for the CERIC funding:

Overheads are not eligible costs and are considered in-kind contributions by the hosting Institution/Partner Facility.

All the purchases funded with the CERIC contribution will be performed by the CERIC central administration.

Ownership and the share of operational costs covered by the co-funding parties (including CERIC) will be a part of the implementation contract between the parties.

All documents must be sent by email to Eol2022@ceric-eric.eu

The proposals must be submitted on the templates in Annex to the present call for EoI, together with the letters of intent demonstrating the additional funds intended and the open access provisions, where relevant.

For further information or questions regarding the Call, please CERIC at contact Eol2022@ceric-eric.eu 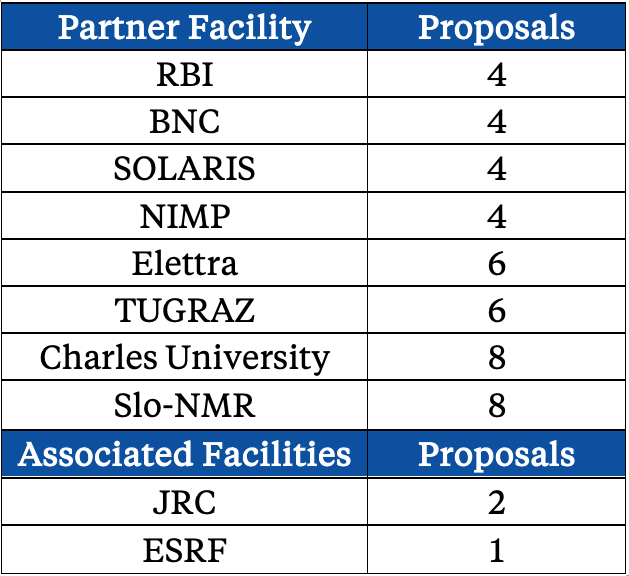