Applications involving iron oxide nanoparticles (IONPs) and nanomaterials in general, are expected to provide solutions to many problems in the fields of healthcare, energy and environment. Magnetic nanoparticles (such as IONPs) have been in the exploratory stage for cancer diagnostics (e.g.,in the form of magnetic resonance imaging contrast agents) for more than three decades and treatment (e.g.,via hypothermia) in the recent decade. However, success stories are rare, partly due to the limited performance of commercially available nanoparticles, related to the particle quality attributes such as size and shape, polydispersity, crystallinity and surface chemistry. Although today’s literature provides many reports on the synthesis of highly complex nanoparticles with superior properties than currently approved products, there seems to be a gap to the application of these materials to fully exploit their enhanced capabilities. This is due, at least partly, to obstacles such as low yield and, most importantly, the robustness and reproducibility of the synthesis method. Hence, detailed studies on nanoparticle formation mechanisms are essential to guarantee that successful syntheses are not a “one-off” but can be performed and reproduced at various research institutions at small to large scales. The work conducted in the frame of the CERIC internal research project Nanoanalytics for pharmaceutics presents such a detailed study, unravelling the growth mechanism of the co-precipitation of IONPs in solution with the aid of synchrotron X-Ray diﬀraction.

Since co-precipitation, which is the most commonly used synthesis for IONPs, features rapid particle formation after mixing the precursor solution containing iron salts with an alkaline solution, the analysis of initially formed particles and identification of possible intermediate phases before the transition to the desired magnetic forms magnetite and/or maghemite is challenging. In order to guarantee fast and reproducible mixing conditions, a flow reactor was utilized for the mixing step (see Fig.1). Subsequently collected particles were analysed via Transmission electron microscopy, Mössbauer spectroscopy, and most importantly Synchrotron X-ray diﬀraction (XRD) (performed at the XRD1 beamline at Elettra) in combination with a flow cell allowing to study the crystalline phases occurring during the synthesis in solution. The signal strength of the synchrotron radiation facilitated the collection of XRD spectra at a frequency which was enough to resolve the dynamics changes of the precipitated particles. 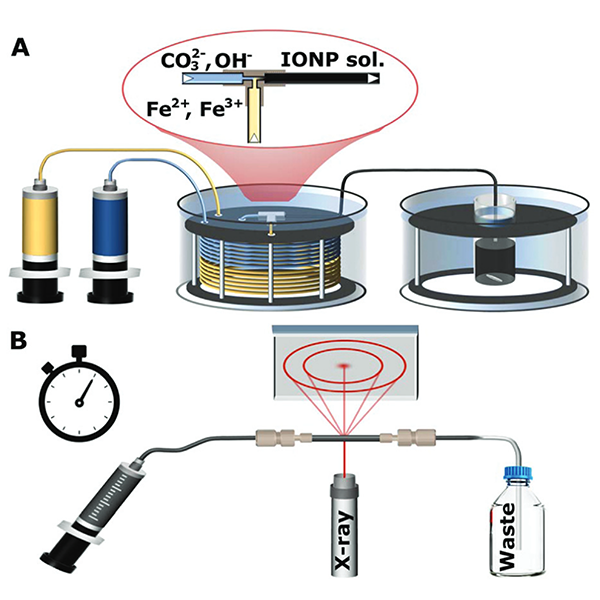 Results revealed that two initial phases were formed upon the direct mixing of the iron chloride precursor solution with a solution of sodium carbonate. The phases were a poorly crystalline ferrihydrite phase formed primarily of Fe3+and crystalline iron hydroxide carbonate plates formed primarily of Fe2+. The iron hydroxide carbonate concentration decreased over time, until it disappeared after 3-4 min of reaction. The ferrihydrite phase grew with time from 2 nm particles, until it transitioned to magnetite/maghemite when the particles reached ∼4 nm in size, which happened after 3–4 min of reaction. The ferrihydrite phase acted as seeds that grew into the eventual magnetite/maghemite particles, while the iron carbonate plates acted as a feedstock to supply the iron ions for the particles to grow and the phase change to occur. Without the presence of Fe2+ in solution, the formation and growth of the magnetite/maghemite NPs did not occur. The TEM images of the nanoparticles are shown in Fig.2.
Such comprehensive understanding of the mechanism is essential not only for robust syntheses, but also to tune particle properties for the targeted applications. In particular, the growth mechanism shows a separation of the nucleation and growth stages in the reaction which will allow chemists greater control over the size of the nanoparticles that can be readily synthesised via co-precipitation. 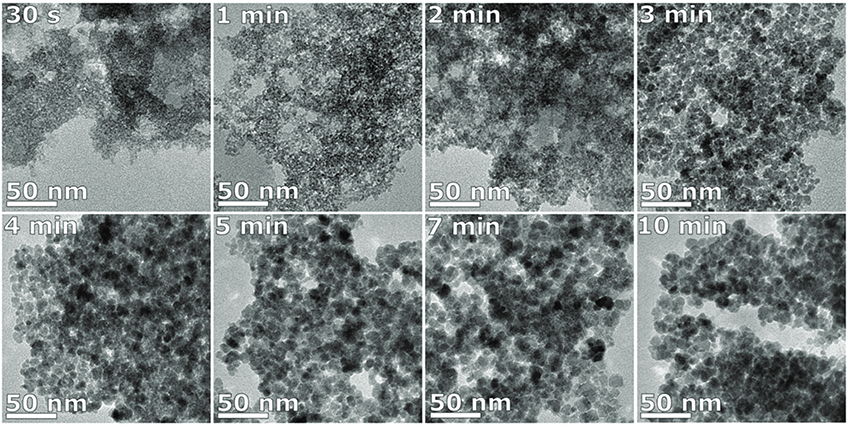