Magnetic materials are a keystone in modern, information-based society. They are used in a multitude of data storage systems, hard disks and MRAM devices, to name just a few. Regardless of the particular type of device, the principle of operation of a magnetic memory relies on the ability to locally control the magnetization. Typically, upon writing, the magnetic moments [1] of all atoms contained within a well-defined microscopic region of the magnetic medium are forced to align parallel to one another. These regions, known as magnetic domains, permit us to code information in the form of unit bits, depending whether the magnetization points up or down. Naturally, for the “read and write” processes to occur reliably, one has to precisely engineer the physical properties of the magnetic material.
Magnetic thin films and artificially fabricated heterostructures are ideally suited to this purpose. Their reduced volume is key to obtain energy-efficient operation and high storage density. It also brings huge economic and environmental benefits, which come from the diminished consumption of materials that are often rare and difficult to extract. As a further advantage, artificial heterostacks allow the magnetic properties to be tuned through layer thickness and interfacial interactions. In this respect, the combination of ferromagnetic layers with 2-dimensional materials, such as graphene and transition metal dichalcogenides, is researched intensively. For instance, graphene-Co stacks are known to exhibit enhanced perpendicular magnetic anisotropy [2], which allows closer magnetic domain spacing and improved stability, a feature that is especially important in non-volatile memories. 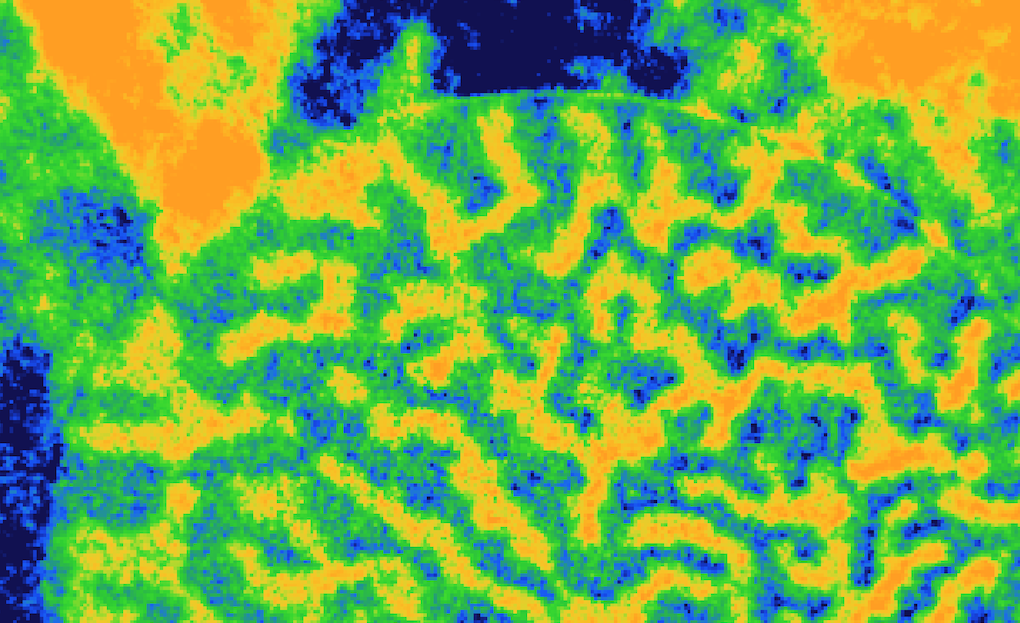 Synchrotron based microscopy reveals the magnetic state of ultra thin cobalt. The disk-shaped structure (diameter of 5 microns) was lithographically fabricated upon irradiating the surface with low energy electrons in CO ambient. It corresponds to the surface area covered by graphene. The stripe pattern indicates that the magnetization is oriented in the out-of-plane direction.

The team around the principal investigator of the CERIC research project MAG-ALCHEMI, Andrea Locatelli from the Italian CERIC partner facility at Elettra Sincrotrone Trieste, together with colleagues from the Universities of Trieste and Milan, devised a new method to graft chemo-magnetic patterns by depositing atomic carbon. To do this, they took an ultra-thin cobalt film and exposed it to carbon monoxide (CO) while irradiating the surface with an intense, micro-focused low energy electron beam. During irradiation, CO molecules readily dissociate, that is, they split in fragments. This process, which is accompanied by the desorption [3] of oxygen, favors the accumulation of carbon at the cobalt surface up to a coverage of one atomic layer. Most notably, it was found that this overlayer can be converted to graphene, a honeycomb network of a single atomic layer of carbon, upon a simple thermal treatment. As demonstrated by magnetic sensitive microscopy, the irradiated and non-irradiated surface regions exhibit out-of-plane and in-plane magnetic anisotropy, respectively. This provides a proof-of-principle that arbitrary magnetic patterns can be lithographically grafted in cobalt. Importantly, this is done without interrupting the lateral continuity of the cobalt film, by simply depositing surface carbon.

The research team is now developing this method of magnetic nano-patterning. Several applications are envisaged, from the fabrication of spin wave devices and filters to complex heterostacks comprising different ferromagnetic layers, where the magnetic coupling is tuned by an interposed graphene spacer.

[2] Anisotropy is the property of being directionally dependent, which implies different properties in different directions, as opposed to isotropy

[3] Desorption is a phenomenon whereby a substance is released from or through a surface.