In the last decades, water remediation has become a key environmental issue. Due to anthropic activities, its pollution increased, and unfortunately, with toxic and non-biodegradable contaminants. We now face a huge challenge to purify it. Several techniques have been studied and tested but the most effective and efficient remains adsorption, i.e. adhesion of particles (atoms, ions, molecules) to a surface. New adsorbent materials have been developed these last years to answer technical and societal criteria: high adsorption efficiency, easiness to manipulate and recover, low financial cost and environmental impact. Cellulose nano-sponges developed in the last years at Politecnico di Milano represent a promising solution.

Cellulose is a natural compound, a long linear chain of D-glucose, found in green plants and algae. In order to obtain the nano-sponges, it is necessary to modify this polymer. The first step is to “break” the long linear chain to get cellulose nano-fibers (CNF). The second step is to confer linkable-properties to these CNFs, so they can be re-structured to provide highly porous materials. To do so, the fibers are first oxidized in the presence of TEMPO[1] radical, and then ultra-sonicated, leading to the formation of the nano-fibers. The latter are then cross-linked in the presence of a polyamine polymer (bPEI), following a thermal treatment, providing cellulose nano-sponges (CNS).

CNS have been successfully tested to get water rid of heavy metals, as well as in drug delivery applications. Their properties have been studied from many angles. However, one was still a hypothesis: their nano-porosity. A joint project between two research groups from Politecnico di Milano and University of Messina, leaded by the young researchers Andrea Fiorati and Giuseppe Paladini, respectively, focused on this property with a structural study using Small Angle Neutron Scattering (SANS) technique at the Budapest Neutron Centre, the Hungarian CERIC Partner Facility. They examined several CNS compositions, differing from the ratio between TOUS (TEMPO oxidized and ultra-sonicated)-CNFs and bPEI, and from the presence or not of an additional compound – citric acid – which confers stability to the CNS. 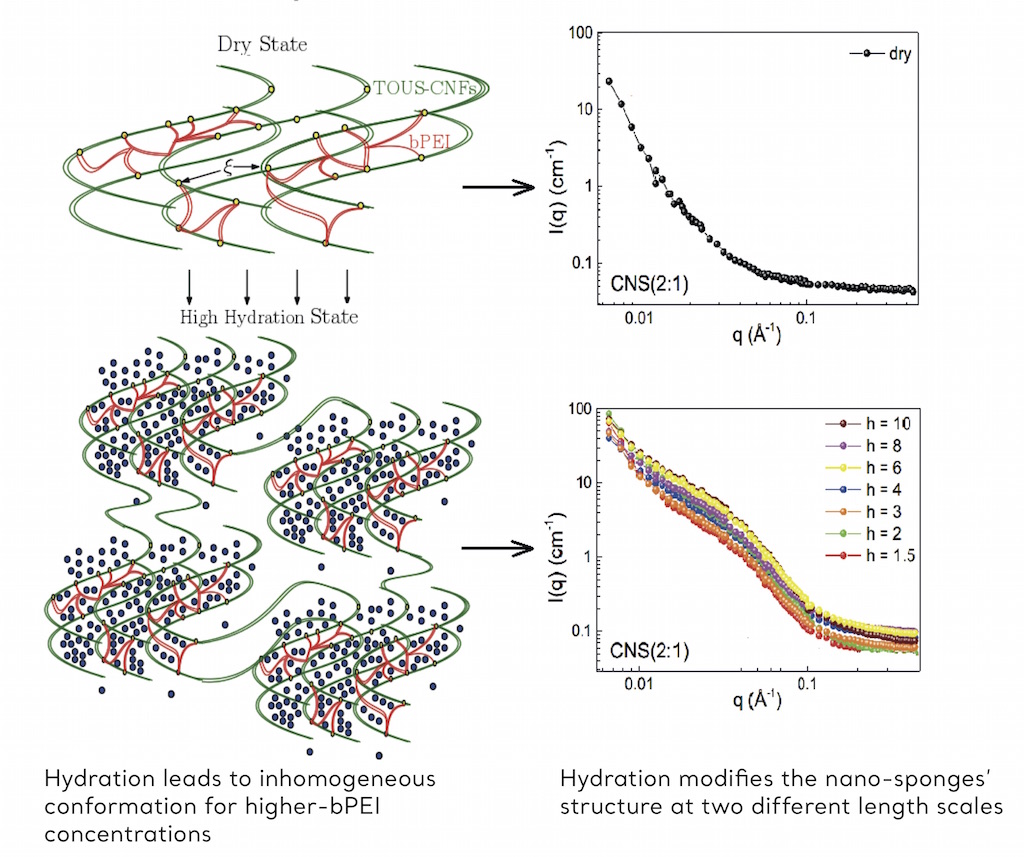 The first observation showed a random repartition of the CNFs within the nano-sponge. This was expected due to the thermal method used to produce the nano-sponges. Hydration does not affect the randomness of the CNFs repartition, however, it modifies the structure of the sponge at two different length scales. Moreover, for the CNS containing more bPEI, hydration leads to an inhomogeneous density of the nano-fibers. The researchers also analysed their experimental results with a correlation length model (CLM), a mathematical model based on the experiments which enables to characterize more precisely what happens at the nano-scale. This CLM analysis provided the confirmation of nano-porosity in the TOUS-CNFs network and the importance of the TOUS-CNFs/bPEI ratio in the behaviour of the sponge when hydrated. It also confirmed the role of citric acid as a stabilizer as it confers rigidity to the CNS. Further investigations are still necessary to have a better understanding of the CNS behaviours, but the work of Paladini, Fiorati and co-workers pave the way to adapt the CNS composition, and functionality, depending on the following application.