Newly discovered isolating, conducting and magnetic material will give a fundamental contribution to future electronics and informatics

An international collaboration of more than 30 scientists from 8 countries realized, for the first time, a material with unique characteristics – the first antiferromagnetic topological insulator. The article was published in Nature on the 18th of December, 2019. Part of the experiments was realized at the synchrotron Elettra in Trieste (Italy), thanks to the contribution of CERIC-ERIC. The discovery will have a significant impact on future applications in electronics and informatics. 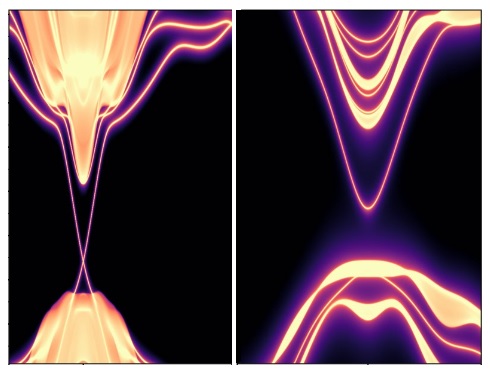 Daily life experience suggests that a material either can or cannot conduct electricity, which makes us speak of a conductor in the first case, and an insulator, in the latter. However, some materials have both characteristics at the same time. They are called topological insulators. If a paper sheet were a topological insulator, the central area would behave as an insulator, while the borders would conduct electricity. Besides, conduction would happen in a much better way compared to classical conductors, which suffer from the Joule Effect caused by the chaotic movement of electrons during the conduction. This is the reason why devices, such as smartphone or computers, produce heat. In topological insulators, this effect is much lower, since their electrons move easily, and in an ordered manner.

The importance of such discovery is given by the fact that, up to now, magnetic topological insulators have been produced adding magnetic impurities in non-magnetic materials, thus limiting their final properties. On the contrary, in this study, a material made of manganese, bismuth and tellurium has been first theorized and then produced. The result is a topological insulator with some peculiar intrinsic magnetic properties in the crystalline structure.

Such material was grown at the Polytechnic of Dresden (Germany) and at the Azerbaijan State Oil and Industry University in Baku (Azerbaijan). The structure and the properties of the antiferromagnetic topological insulator have been confirmed with experiments in different labs, among which is the synchrotron in Trieste. The research group was granted free access to the infrastructure, thanks to the contribution of CERIC-ERIC.

This work is the result of an international collaboration involving scientists from Austria, Azerbaijan, Germany, Japan, Italy, Russia, Spain, and the USA.

Luca Petaccia, a researcher at the CERIC Italian representing entity, the synchrotron Elettra, and co-author of the study, affirmed: “I am proud that with the BaDElPh beamline we have contributed to this work. This achievement is the result of an international collaboration where everyone gave its best with a strong commitment, reaching this relevant result”.

The applications of this new material will have an impact on electronics and informatics in the near future, and especially on spintronics. Spintronics is the future application of electronics not based on the movement and electrical charge of electrons, and instead on their rotation (spin), which can only assume two values, thus being compatible with current informatics binary systems. Future electrical components will be faster, less energy-consuming and will heat less.