An international collaboration, led by CERIC users, Professor Paolo Falcaro from the Institute of Physical and Theoretical Chemistry of the Graz University of Technology, successfully realized a nanoporous substance from minerals achieving both low environmental impact and costs of operation. The research was published on the journal Chemistry of Materials.

The metal-organic frameworks, or MOFs, are a young class of compounds that were synthesized for the first time at the start of the XXI century. They are the known as materials with the highest surface area. To have a clear picture, a teaspoon of MOFs has a surface area equivalent to an entire soccer field.

What might seem a mere world record has actually very impactful applications such as gas storage, gas separation, and catalysis. The peculiar properties of the MOFs are defined by their intricate structure, which is made of metal ions, or clusters, bonded by organic ligands. 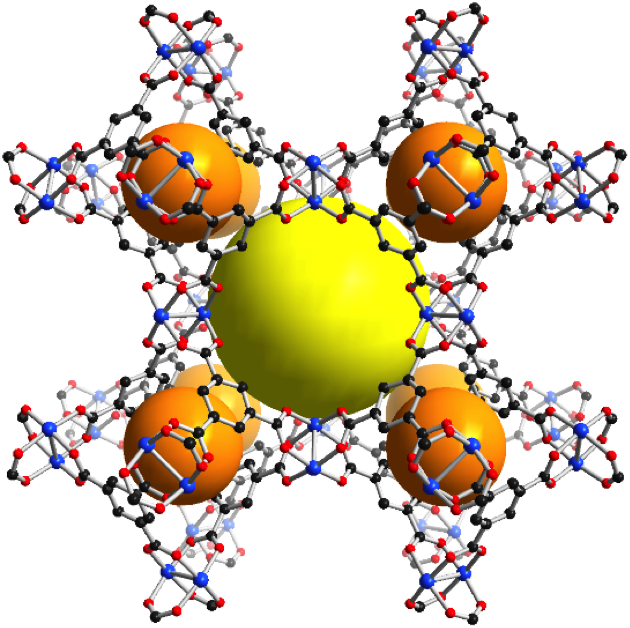 3-D structure of a MOF showing the molecular structure

In the picture above, the spheres represent empty spaces. Since gas molecules tend to accumulate on the surface of the container, increasing the surface area leads to an increase in the storage of gases. The counterintuitive result would be that, at a given pressure, a tank full of MOF can store more gas than an empty tank. One of the first commercial applications of MOFs was the storage of toxic gases for the semiconductor industry. Those tanks full of MOF crystals can store large quantities of gases at a sub-atmospheric pressure, which means that in case of a mechanical failure of the tank the toxic gas stays inside. Just the opposite of what would happen with pressurized containers.

However, between many interesting properties and applications, there are also some downsides. The synthesis of those compounds often involves expensive purification steps and the production of environmentally harmful organic compounds. The research led by Professor Paolo Falcaro tackles these issues precisely.

A MOF called HKUST-1 was made from copper carbonate, which naturally occurs in minerals like malachite and azurite, found in copper mines. Because of their abundancy and bright colors, they’ve historically been used as pigments. The HKUST-1 was prepared from both pure copper carbonate and powdered, unpurified, malachite, and azurite.

Two examples of the copper minerals used for this study, malachite on the left, and azurite on the right

The transformation of copper sulfate in HKUST-1 happened in a solution of benzene-1, 3, 5-tricarboxylic acid (H3BTC) prepared in a water/ethanol mixture at room temperature. The reaction occurred at room temperature in 3 hours, having water and carbon dioxide as byproducts. This result marks a step ahead on tackling issues like the cost of the precursors and the environmental and biological toxicity of the byproducts. 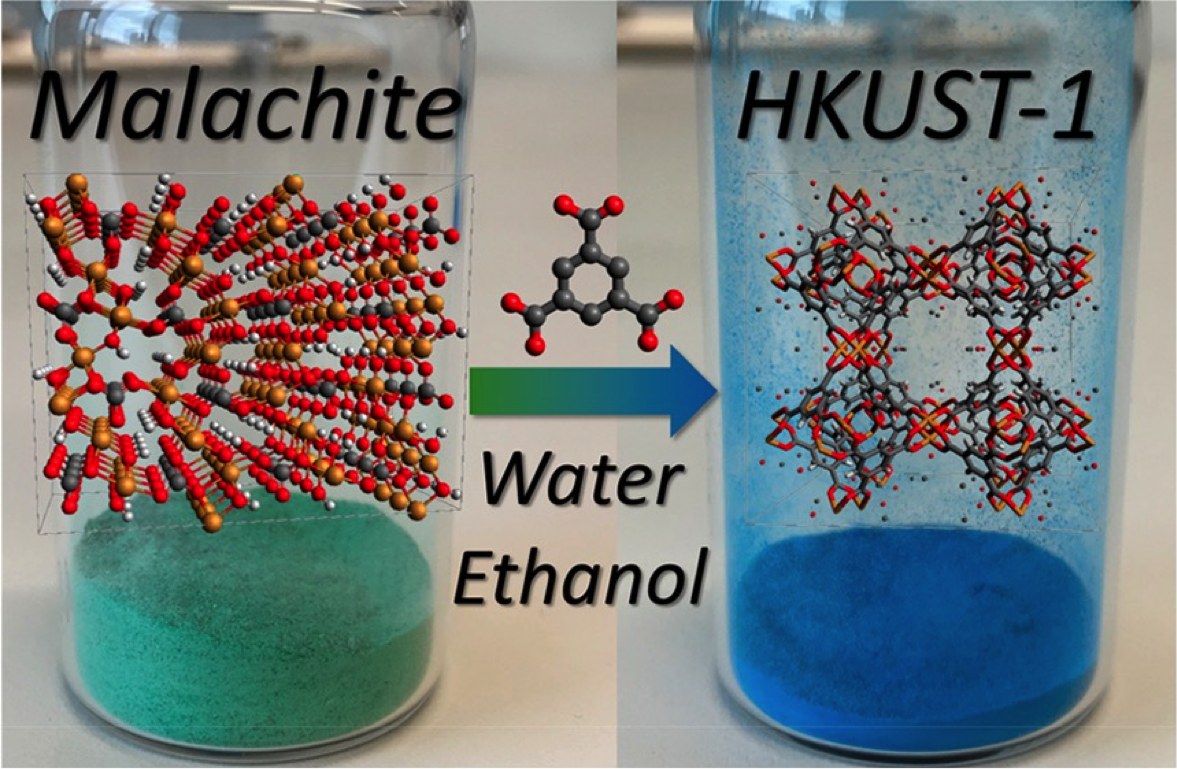 The conversion from the precursors to the product was monitored by Small and Wide Angle X-Ray Analysis (SAXS/WAXS) at the Austrian CERIC’s partner facility at the synchrotron Elettra in Trieste, Italy.

The access to this experimental facility was granted, free of charge, through a CERIC’s call for proposals.

This piece of research holds the promise for future exploitation of minerals as cheap and readily available sources for MOF synthesis.